We had an extremely successful race weekend at iDube. I started on Wednesday afternoon to clean and prepare the kart for the race weekend. On Thursday we started practicing at lunch time as the track was dirty in the morning. We put new tyres on later Thursday afternoon and went straight to the top of the time sheets. 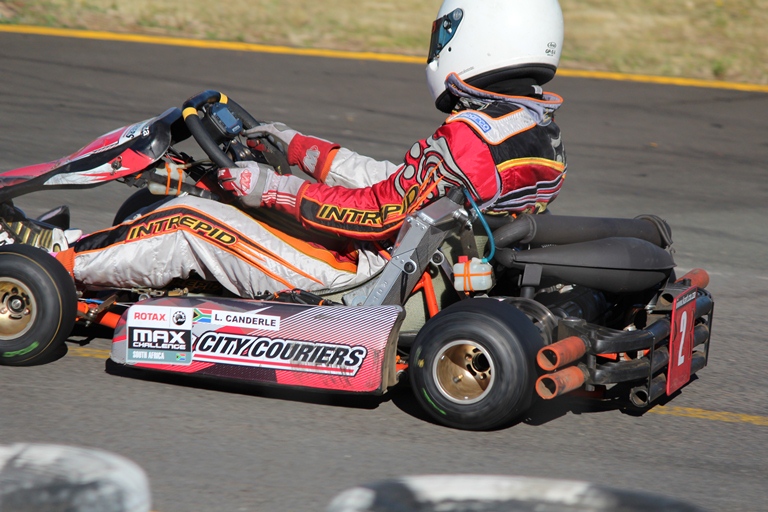 On Friday we started much earlier and the focus and kart set-up started coming into effect. We carried on with fast times and tested a new engine, however the conrod bearing was still a bit tight so the bottom end was lacking and I dropped a few places on the times sheets. I did a few more sessions with this engine but the bearing did not free up so we put back our race engine and I went straight back to the top.

On Saturday morning we had a free practice before qualifying and the races, I went out and new I was going to be hard to beat the entire weekend. I made a small mistake in qualifying which pushed me to second. I was not worried as I knew over a race distance I would be much faster. The first race was a bit intense as I was pushed back to 4th as I started on the outside. I knew that Caleb could not get a gap as he is hard to catch. I went back into 3rd in the 4th corner where I dived down the inside of third place.  Two corners later and I was into second place about a second behind Caleb. I caught him in two laps and now the battle started heating up. I passed him going into the first corner however he passed me back going in the hairpin at the bottom of the track.  We carried on like this for about two laps and on the third lap I passed him in the first corner, this time slowing right down so he couldn’t accelerate until I had, this enabled me to get a gap on him and I pulled away. With two laps to go I knew something was wrong, like a flat tyre or a loose wheel, on the last lap it got really bad however I had pulled enough of a gap and kept my first place. Two more laps and my front right wheel would have snapped off…

The second and third races where much easier than the first and I won the both easily as I lead from start to finish every race. The action started in the fourth and final race of the day; I started in 4th place as my time in the 3rd race was not as fast as the other guys pushing each other trying to catch me. I was pushed back to 5th at the start and had quickly worked my way back to third place by the second lap. I passed Caleb going into the first corner and he tried to get the run on me going into the next corner, however this did not work and we collided and had a very spectacular and hard crash putting both of us out the last heat. I only scored 9 points in the final race so I ended up second overall for the day. 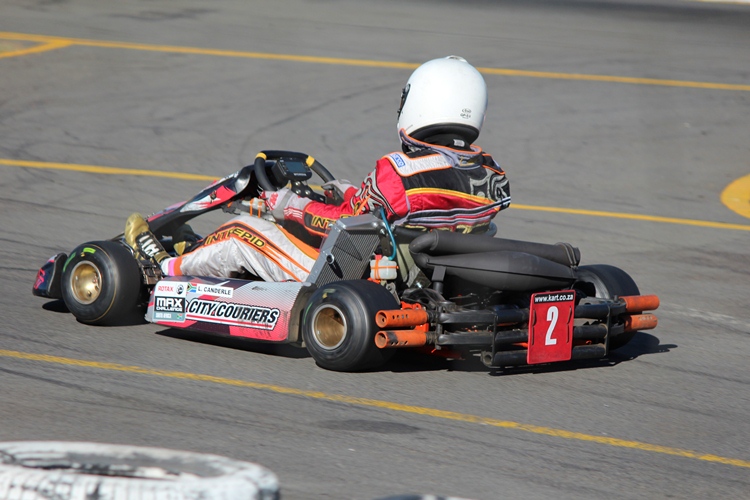 The work started when we got the kart back to the pits after the racing on Saturday afternoon. The entire right hand side of my kart was bent and broken so we had lots of work to do before Sunday. We fixed the kart and left the track at 9:30pm.

We arrived back at the track at 6:30am on Sunday morning to double check everything was tight and ready to go. I was nervous that my chassis was bent so I took it easy in the warm up session, I thought I was doing very slow times however the track had lots of dust on it and everyone’s times dropped off, I was fastest after morning practice and confidant to race again. I rectified my mistakes of Saturdays qualifying and stuck it on pole. The difference between Saturday and Sunday was that on Sunday it is only the last race that counts and its winner takes all. The racing on Sunday was much less exciting as Saturday as I won all three heats with relative ease and won by a more than comfortable 4 seconds.

This fantastic weekend of racing enables me to compete in the world finals in Portugal between the 28th of November and the 1st of December 2012. I also took the lead of the South African Championship with my wins on Saturday.

None of this would have been possible with the help and support of you, Richard and City Couriers and I am forever in your debt.  Thank you ever so much.

P.S: Maybe I can bring home the world championship!