The 2015 triathlon season got underway this last weekend with the Half Ironman, which was held in East London. This is one of the biggest races on the calendar, with over 3500 competitors taking to the start line. In case you are unsure what is involved in doing a Half Ironman, it’s made up of a 1.9 km sea swim, followed by a 90 km road cycle and then to top it off, you have to do a 21.1 km run.

I put a lot of hard work into training for this race over the Festive Season, which is often difficult with friends and family all relaxing and taking time to recover. Nevertheless, I put my head down and got in some good training. 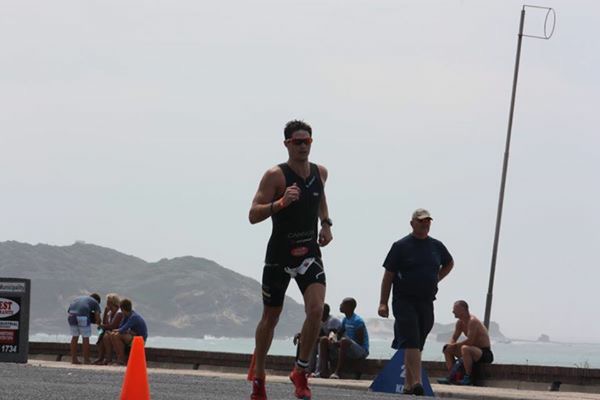 Going into the race, I was not sure how I would do, as a lot has changed over the last year. I got married early in 2014, took on a new job in October and welcomed our new baby girl into the world on the 1st of January this year. The morning of the race revealed that it was going to be a tough day. The sea was big and very choppy, the wind was howling and it was hot – very hot. However, this year’s race was a great day out for me, and I managed to win my age group, which was the largest and toughest age group in the field of over 3500 athletes. I finished in a time of 4-hours and 44-minutes, which got me 1st position in my category, and 16th overall, which included the professional athletes. Obviously, not racing as a full-time professional athlete and managing to come in amongst the pros shows that my current form is looking good for the rest of the season.

I look forward to my next race, which will be in Johannesburg on the 17th February. Thanks a lot to City Couriers for the support and help in getting to the race in East London. I really appreciate it.

Until my next update, its back to work for me.