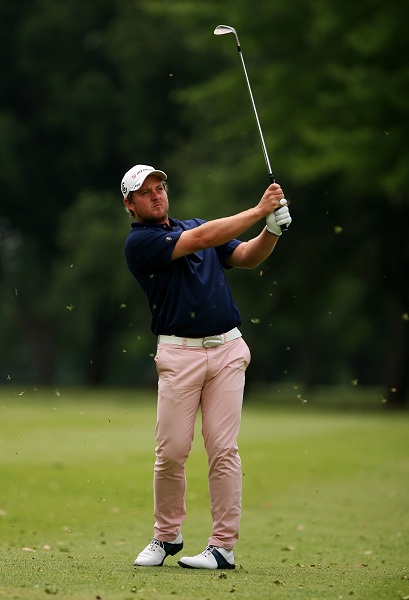 After coming out of a long winter season I was eager to get a jump on the summer events, with the suggestion from Richard Fisher to visit sports mentor Tim Goodenough I felt that my game and mental focus were ready to tackle the end of the year.

I had been working very hard on my game as well as my physical fitness and mental toughness. With all these elements coming together it was finally time to reap the rewards. None of this would have been possible without the help of Richard and City Couriers, I really appreciate the opportunity to pursue my dreams and achieve my goals, I can’t thank Richard and City Couriers enough for the opportunity.

On Saturday everything went right for Merrick Bremner, who signed for a bogey-free 65 at Glendower Golf Club and vaulted into a one-shot lead at the BMG Classic.

“You’ve got to know where to miss it, and I was fortunate a couple of times today. It wasn’t all planned, but if you’re going to shoot a good score you need a bit of luck,” he said.

Bremner struggled in yesterday’s afternoon winds and carded 73. Saturday was a different story for the 26-year-old, whose 6.50 am tee time made for benign conditions.

“I knew after the round yesterday that good morning conditions meant you could really shoot anything out there. Yesterday afternoon was brutal – the wind was about three clubs. This morning wasn’t even half a club, so it was a lot easier,” he said. Aside from the weather playing into his hands, Bremner took advantage of a few nice lies, and during the course of the day hit four shots to closer than a foot.

“I think I only hit two fairways, but I still had second shots,” he said. “I’ve worked hard on my short game over the last few weeks off, and if you can up-and-down after missing a green then things don’t get too bad. I didn’t make a bogey today, which helps!”

The BMG Classic, with its Sunday finish, hails the beginning of the Sunshine Tour’s summer swing. Bremner was excited to be peaking en route to that lucrative period.

“I always tend to play well heading into summer. It’s hard to get yourself to practice and play the whole year round, and the winter tour allows us to regroup and rebuild. You have to build your game up to get ready for the bigger events,” he said.

With seven touring years under his belt, Bremner already had a hunch about what it would take for victory this week. “It’s going take another round like today. There’s no secret to it, the conditions are what they are. Anything can happen, and it depends on what the guys do this afternoon, but I think 12-under will have a chance.”

Divan Gerber was one of the few to break par in the afternoon wind on Friday. He continued to build on Saturday, shooting an impressive 69 for a share of second at five-under-par.

“I played well yesterday and today I kept it in tact, so we’ll go from there,” he said. “I’m very happy with five-under for the tournament. I’m excited to play – it’s been a while since I’ve been in contention – I can’t wait!”

Tyrone Mordt, back from a stint in Europe, made his way round in 69, securing his share of second early on. He highlighted his round with consecutive birdies from the 12th to the 15th, and will surely be confident on the stretch tomorrow.