On Saturday the 23rd of March, the first round of the, South African National Championships, at Killarney Raceway, in Cape Town. As I was the reigning South African champion, it would be important to get a good result if I want to maintain my title.

The day started off well, as I qualified 3rd for the first race. From my starting position I got into first place on the second corner. I stayed in the front until the chequered flag dropped, winning the first race of 2013. As grid positions where on times of the previous heat I only started 4th in the second heat. I got caught up at the start of the race, however I managed to climb my way to second place, where I finished the race. In the third race I started on pole and finished in second after a long battle for the lead, in the fourth and final heat of the day I started in first place and finished in first place, winning the first event of the year.

However after the races, due to a technical fault I could not yet be awarded my points. The decision is still under review and will be finalised in the next few weeks.

On the 24th of March, the third annual African open took place at Killarney. After the incidents on Saturday I was even more determined to win this race, as it would secure my ticket to the 2013 Rotax Grand Finals in New Orleans in November this year.

In qualifying I posted the second fastest time, however I was under-weight by 200grams. Due to this I had to start at the back in the first of three heats. However I was confident I had fast enough times to get back to the front. From 22nd on the grid, I managed to climb my way up to 3rd place. In doing so I recorded the fastest lap time, meaning I would start on pole in the second heat. I went to third for two laps, then up to second for a further four laps and I lead the remaining 9 laps and won the heat.

In the winner takes all final, I started on pole position. This was determined by average finishing positions of the previous two heats. The pressure was on in this race. I lead the race for the first two laps, then to second for a lap, then down to third. I stayed there for 4 laps, and on the 8th lap I went into second place. The leader had a small gap and it took me 4 laps to catch him. On the 13th lap of 20 I made my move and went into the lead. However I made a mistake and I went back down to second for a further lap. I went into the lead on the 15th lap for the second time, however this time I did not make the same mistake. I lead for the next 5 laps which felt like an eternity to win the African Open and getting my ticket to the 2013 World finals. 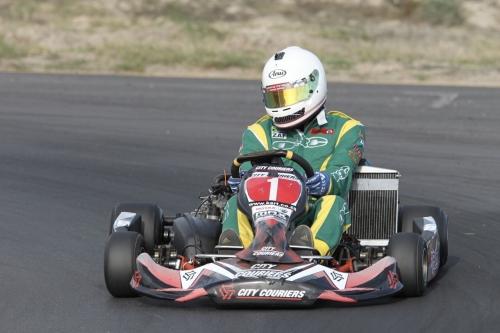 Thank you to City Couriers, as without your sponsorship this would not have been possible. I look forward to the rest of the year as im confident we are going to get great results.